When I started as a reporter for a newspaper in a small New Mexico town in 1989, I didn’t realize how invaluable my profession would become for me as an author. Now, more than 25 years later, I have worked in six newsrooms between Colorado, Washington State and New Mexico and have written thousands of articles. I have won more than two dozen awards, including two national awards for editorial writing.

In addition to being a journalist, I am the author of The Friday Edition, Revenge is Sweet and Dead Wrong, an award-winning mystery series featuring reporter Samantha Church as well as a new legal drama, An Invincible Summer. Being a journalist has been the perfect profession for me. In addition to developing my writing skills and a strict discipline of meeting daily and weekly deadlines, being a journalist has satisfied my curiosity for many things, and has allowed me access to people and places that I would not have otherwise had.

I started my first job as a reporter July 10, 1989. I had only been on the job for a week when I covered my first murder story of a man who had shot and killed a convenience store clerk as he robbed the store. He was found a short time later. He was arrested, eventually tried and sentenced to life in prison. Three months later, I covered another murder story—a rancher had shot and killed another rancher following a land dispute. He was convicted of manslaughter. Both incidents, though unfortunate, allowed me instant and early access to police procedures and court proceedings.

When I came to Denver, Colorado to work for another newspaper, I covered the city of Arvada, a suburb of Denver and its police department. One feature in our newspaper—“Cop Shop”—required the reporter to visit the police department to review hundreds of police reports before selecting a handful of reports to be published in the coming week’s edition. Doing “Cop Shop” gave me an intimate knowledge of how and why these reports are completed. Also, one of my best stories was an article I wrote about the department’s property and evidence room. I also went on ride-alongs with police officers and became good friends with many on the force including the police chief and his secretary.

In my book, The Friday Edition, my main character, Samantha Church, is a newspaper reporter. Her experiences in the first three books and in the ones that will follow are taken from my many personal experiences as a reporter. In The Friday Edition, Samantha must get through a corrupt police department to discover her sister’s murderer. I modeled my fictional police department after the “real” ones I covered. I also met and became good friends with a man named Russ Cook, who was at the time I worked in Denver, police chief of the Golden Police Department (he has since passed away and one of his last jobs was as the sheriff of Jefferson County when the Columbine school shootings occurred.) I lost track of the countless questions I asked Russ that related to police procedures for The Friday Edition. He answered every one and also read the book to make sure the story was realistically told from the police procedural standpoint. 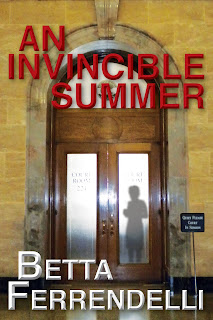 I got the idea for my new book, An Invincible Summer,  after a meeting a women at my first newspaper who had a severely handicapped daughter. Summer is the story of Jaime Monroe, a young attorney who accepts a case of a young woman with a mild mental disability whose mother, a journalist, wants to have her forcibly sterilized. It was the close relationship I formed with that mother and her daughter that became the impetus for Summer. While working in Denver, I was also fortunate to meet an attorney and another woman who had a child with a disability and shared my thoughts and ideas for Summer with both of them. She had several good ideas that I believe improved the story. The attorney also answered many questions that related to the hearing in the story and read that section of the book to make sure it was accurate. I continue to work as a journalist today—always prepared that I am going to stumble onto another (great) idea for my next book!
Betta Ferrendelli is the award-winning author of the Samantha Church Mystery Series featuring reporter Samantha Church. Her most recent novel is An Invincible Summer. Many of Church's adventures come from Ferrendelli's own experience since 1989 as a prize-winning journalist for newspapers in Denver, Seattle and Albuquerque. www.bettaferrendellibooks.com.


An Invincible Summer by Betta Ferrendelli

In this gripping legal drama, rising prosecutor Jaime Munroe resigns her post to represent Ashleigh Roberts, a mentally challenged young woman whose mother and legal guardian is seeking to have forcibly sterilized. Jaime is a promising young lawyer with the Denver District Attorney’s Office. She makes her name by successfully prosecuting the case of a teen-aged girl with a severe mental disability who had been raped and murdered. Although she comes across as strong and confident, the girl’s case opens old wounds for Jamie, who is struggling with tragic events from her past.

Leigh Roberts, a reporter for a Denver daily newspaper, covers the trial, and this case also hits close to home. She is the mother and legal guardian of Ashleigh, who has a mild mental disability. Ashleigh is a cheerful young woman about to become truly independent. After living for years in a group home, she will soon be on her own in a living arrangement with minimal adult oversight. She will also quit work at a sheltered workshop to begin a job in a food court, where she will have daily interaction with society’s mainstream. With these dramatic life changes, Leigh fears that Ashleigh will be an easy target to deceive. Only wanting to do right by her daughter, she seeks the court’s approval to have Ashleigh forcibly sterilized.

The case tugs at Jamie and affects her personal life. She even oversteps ethical boundaries by befriending Leigh. Jamie also becomes close to her client Ashleigh, and the young woman’s cause soon becomes her own. The lines continued to blur as the lawyer looks not only to help the young woman but seemingly wants to clear her own conscience over a childhood death she could have prevented. Undaunted by the overwhelming odds against Ashleigh winning, Jaime leads the charge and takes the case to court in a battle that ultimately resolves one woman’s past and another’s future.  Readers will be swept up by arguments on both sides in An Invincible Summer and will keep guessing the outcome until the last page.

CLICK to read an exciting chapter excerpt!
Advanced Praise for An Invincible Summer

Readers of John Grisham and other courtroom dramas will find much to relish in An Invincible Summer, with its exact description of proceedings. Followers of intrigue and mystery will find more than a dash of these elements spicing a story line that clearly delineates the boundaries between mother, lawyer and sister -- and then dissolves them in an intricate cross-examination of inter-connected lives.
--D. Donovan, Senior Reviewer, Midwest Book Review

Readers will be glued to the pages, waiting to find out how the story will end. The author has done a fabulous job in creating characters that her readers will connect with, relate to, and continue to think about long after the book is done. I could not put the book down. The author's understanding of the workings of the legal system certainly shines through, and there were points at which I felt I was actually in the courtroom.
--Tracy A. Fischer, for Readers' Favorite (5 Star Review)