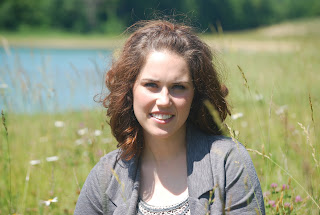 Meet my dear friend, and co-volunteer at the WLC,
T.M. Souders!!
T.M. Souders was born in Johnstown, PA and grew up in a suburb outside of Pittsburgh. She graduated in 2004, from Youngstown State University, with a degree in Psychology and minor in Women's Studies. She is the author of bestselling women's fiction novel, Waiting on Hope, as well as the holiday novelette Dashing Through The Snow. Her young adult novel, Freedom Road, is set for release September 17th. She currently lives in rural Ohio with her husband and children. 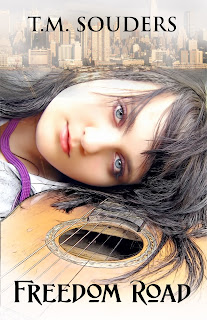 Cover Reveal of Freedom Road
RELEASES SEPTEMBER 17TH!!
FREEDOM ROAD BLURB:
Since the tender age of eight, music served as Samantha Becker’s source of solace against her father’s tyranny and her mother’s alcoholism. Now at eighteen, her only dream is to study classical guitar at Juilliard. But in one careless moment, Sam’s world is shattered. A horrific accident threatens her ability and hope to ever reach her dreams. Just when she’s about to give up, two unexpected people enter her life and change her world in ways she never thought possible.

With her future hanging in the balance, Sam must relearn to play the guitar, or be destined to give up her dreams forever.
EXCERPT:

Two days. That’s the length of a hospital stay after your father lops your finger off with a kitchen knife.

I remembered the morning clearly. Maybe I always would, or maybe with time the memory would fade and be one of unimportance as everyone wanted me to believe.


The scent of rain and decaying leaves wafted through the open windows. Cool air whipped inside, diminishing the stench of burning oatmeal from the kitchen. I hurried into the room, my guitar case slung over my shoulder. I was late. In twenty minutes my presence was expected in Mr. Neely’s classroom for one of our practices. Time is of the essence, he told me. And how could I argue with that when the single most important day of my life approached?
“Damn it!” my father cursed. He tore the pot of burning oatmeal from the burner and threw it in the sink with a bang. Waiving a towel, he attempted to hasten the foul air out the window.


I brushed past him with my head down. When I opened the refrigerator door, I grabbed the first thing I saw. A carton of strawberry yogurt would have to suffice. There was no time to be choosy. Besides, the longer I stayed in the kitchen, the more I risked a confrontation with him or my mother.
The shattering of glass cut through the silence, followed by a low guttural moan. I gritted my teeth. Sure enough, when I rounded the corner into the living room, I saw my mother splayed on the ground, the empty bottle of some form of spirit broken at her feet. She rolled over. Pieces of glass stuck to her robe. I covered my nose, trying not to gag at the sour smell of alcohol.


The clipped stride of my father resonated over the hardwood floor as he entered the room. He knelt down beside her and began to pick up the shards of glass off the floor. Oblivious, my mother stood up, gripping the wall for support, and stumbled her way to the couch. I took this as my chance for escape and started toward the door, hoping my exit would go unnoticed.
“Samantha, I need to speak with you for a moment. In the kitchen.”


Wincing, I turned. The plastic shopping bag in my father’s hand was heavy with glass. With his gaze still on me, he nodded toward the kitchen and left the room. For a moment I debated sneaking out anyway, but I followed him, saving myself the lecture later. I walked up to the counter. The strap over my shoulder dug into my skin, a reminder of the time—and how I didn’t have any. This had better be fast.
“What?” I chewed the inside of my cheek and glanced at the clock.


He tossed the bag of glass in the trash can and moved to a cutting board on the island. “I wanted to let you know that I’m signing you up for a class this summer at the American Banking Institute. It will be good for you to build up some knowledge before you start working for me.”
Heat rose to my cheeks. It was only October, yet he planned my summer. “I already told you I’m not doing it. I won’t work there. You’re wasting your time.”


Taking a chopping knife out of a drawer, he sliced through the apple in front of him, halving it in one clean swoop.
“This isn’t up for debate. You’ll have to get used to the idea.”


I shook my head. This argument could wait. All I wanted right now was to feel the smooth contours of my guitar in my hands, to feel the chords of the music as I played.
“Fine. Whatever.”


What happened in the seconds following this exchange blurred into a single moment. My mother crashed into the kitchen, knocking over the wine glasses nestled on the hutch. A string of obscenities followed, along with accusations that someone rearranged the furniture. Out of the corner of my eye, I saw the raised knife poised above the apple. My father said I shifted my hand on the island, distracted by my mother. A totally plausible explanation—if it were true.
All I remembered was staring down at the halved apple, now drenched in my blood, with wide eyes. Then pain. A sharp stabbing sensation overtook my entire hand. I vaguely recalled screaming in the background. Where it came from I’m still unsure. Possibly me, or my mother.


My father’s panicked voice chattered away as he squeezed a white cloth over the finger, causing the pain to shoot through my arm. I don’t recall moving. I don’t remember speaking or moaning in pain. All I remember is staring at that blood soaked cloth, thinking This is my fretting hand.
Posted by Amy Manemann at 5:09 PM