Put your hands together and let's give a warm welcome to my sweetheart of a friend, Emerald Barnes!!! This little southern belle has a charming wit that you can help but love, and she's on tour with her newest release, The Marked!!


Story Synopsis:
Knight’s Academy, Book 1
Myka Williams has never fit in with her peers, and although her adoptive parents are loving and supportive, she feels most at home alone in the woods. When she's offered a full scholarship to Knight's Academy in the Smoky Mountains of Tennessee, she takes the opportunity for a fresh start. She soon learns that Knight’s Academy is more than just a school. Within the stone walls of the institution, humans and vampires are mixing, and their offspring are going unnoticed. As Myka falls prey to the evil plan of the school, she makes a chilling discovery about her own heritage and realizes that she’s at the Academy for more than just an education. Myka must yield to her birthright at the risk of losing everyone she loves or succumb to the fate that Knight’s Academy has in store for her—a fate worse than death.

From the Author's Desk:

Thanks, Amy, for having me on your blog today! I always love stopping by!
As a paranormal author, I write about different types of creatures, such as vampires, werewolves, angels and demons. I’ve written Christian paranormal novels, and I’ve recently released a teen paranormal book about vampires and werewolves. There was a fairly big difference in writing the two for me.
Writing Christian fiction is always great. My Christianity is a huge part of who I am, and I love writing about how God loves us. But before I became well known for writing Christian fiction, I wrote this book called Knight’s Academy, but it soon became known as The Marked. 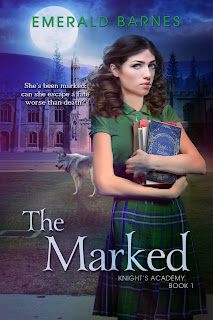 When I wrote The Marked, I was all into vampires and werewolves. I had a thing for Twilight and The Vampire Academy series, so I guess that’s why I was dreaming about vampires, and the dream is what inspired my book.
Writing about vampires and werewolves was so different to me than writing about angels. With my angels, I tried to make sure I kept them as Biblical as possible. It really bothers me when authors write about angels in a non-Biblical way, so I took what I knew about angels and did my best to keep them as real as I could in a fictional novel. But with The Marked, I had more leeway. I could do anything and everything I wanted with these fictional creatures. I was able to change some well-known ideas about werewolves, and I was able to keep some well-known ideals about vampires. With angels and demons, I didn’t feel as if I could do that. I kept them as close to facts from the Bible that I could determine.
And that’s what’s great about paranormal fiction. No one thing is correct. You can have immortal vampires, and if you choose, mortal vampires. You can have Biblical angels and angels that aren’t Biblical. It’s completely up to you. Though, as I said, I try to keep things as real as possible with my angels.
The paranormal genre is so important to the fictional world, and I think that’s why I love writing it so much! It offers an escape to reality. It offers this who unusual world to be a part of. It’s fun. It’s dangerous. It’s amazing! That’s what it’s like for me when I’m reading or writing it.
And if I’m writing it from a Christian perspective, I like being able to use this unusual genre to garner the attention of readers and help show them how much they are loved. I use it to help shed light on difficult topics that I can broach but still keep the book in a fun perspective. I like having that option.
So, if I had to compare and contrast the paranormal genre and the Christian paranormal genre, I would say, in general, they have more similarities than differences. They’re both fun. They can be used to help readers overcome personal issues, and they can help them escape reality for a while. The difference? Christian paranormal books tend to be more focused in reality; in something that I believe can actually happen.
What do you think would be the main difference in the two types of paranormal fiction? 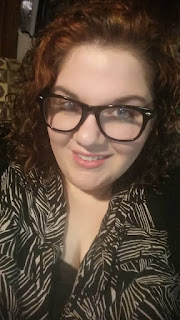 Emerald Barnes resides in a small town in Mississippi and has the accent to prove it. She’s an auntie, a youth leader, a Whovian, a little bit of a nerd, a reader, a writer, and a family-oriented person. God is number One in her life, and she thanks Him continuously for His love and favor. She’s addicted to tv and binge-watching shows, and she has a thing for superheroes.
Connect with Emerald:
Website: www.emeraldbarnes.us
Blog: ebarnes23.wordpress.com
Pinterest: www.pinterest.com/emeraldbarnes
Facebook: www.facebook.com/fanpageforemeraldbarnes
Twitter: www.twitter.com/emeraldbarnes
Street Team: www.facebook.com/groups/emeraldbarnesstreetteam
Instagram: http://www.instagram.com/emeraldbarnes
Goodreads: http://www.goodreads.com/emerald_barnes
Posted by Amy Manemann at 6:48 AM