Love a sassy, no nonsense woman determined to make her mark? How about a hot alpha male who doesn't like to take no for an answer? Meet publicist, Mia Scott, and professional baseball pitcher, Evan Ahrens. Sparks will fly, but can they deny the heat simmering between them? Find out in my newest release,
The Remingtons: Pitching for Love! 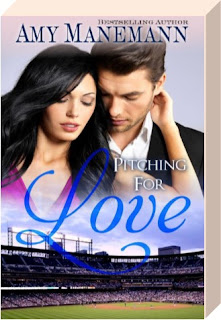 
Tough as nails publicist, Mia Scott, has built her career by dodging the advances from her elite clientele. Her number one rule; never mix business with pleasure. Until a split second decision leads her to a night of unbridled passion -- and the morning after blues when she discovers the man she spent an amazing night with is her newest client.

Professional baseball pitcher, Evan Ahrens, knows he messed up, and messed up royally. One mistake on the field puts him on thin ice with the league and lands him a new PR rep to fix his soiled image. He goes to NightCaps to toss back a few drinks and blow off some steam -- and meets his match in a feisty dark haired woman who takes him to heights he's never been. There's only one problem -- she's his new publicist, and she's made it clear there will be no repeat performances.

A battle of wills gives way to uncontrollable passion as Mia fights her growing feelings to keep things professional, while Evan decides for once in his life he wants something more. The game just went from saving his career, to pitching for love.

SIGN UP TO WIN A KINDLE FIRE!!!
a Rafflecopter giveaway