My fun interview with author Stacy Eaton on her newest upcoming release, Six Days of Memories! 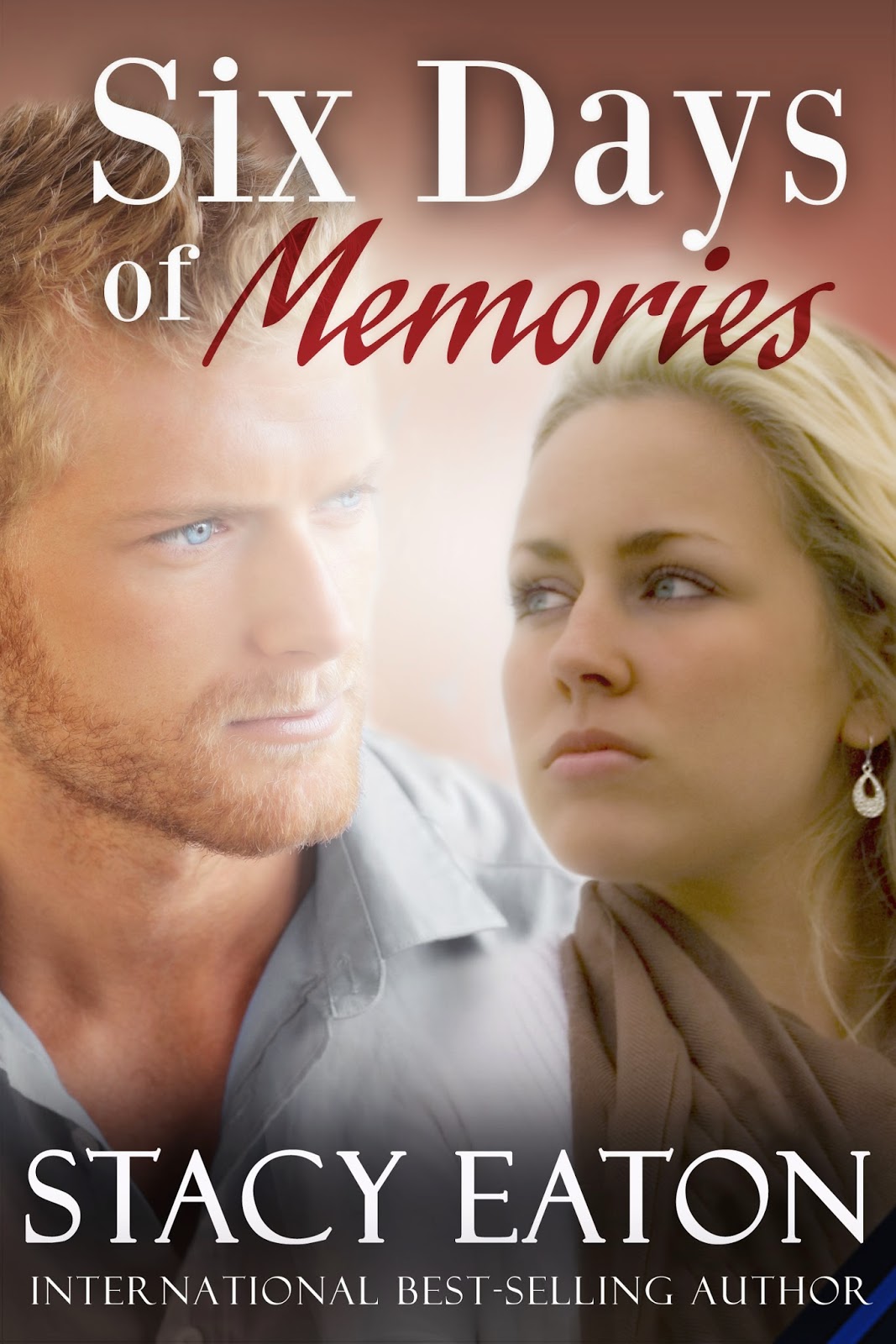 ME: Six Days of Memories, a title that leaves much to the imagination (and we know how big my imagination is!). So, what can you tell us about the title and the story itself?

SE: Amy, sometimes your imagination is even worse than mine, lol…
This is what I can tell you, Detective Natasha Foster responds to a car accident and finds the female passenger dead, the male driver unconscious, a bag of money in the backseat and a body in the trunk.  When the man wakes up, he has no idea who he is. Tasha nicknames him Jay.
This particular quote is where the title came from. Jay is leaving Tasha a message after his memory has returned. “I have thirty five years of memories, and yet the only ones I want to think about are the six days I was with you.”
How’s that?

How’s that? Holy Moses! This story sounds like a fast paced, action packed read, and I’ve been anxiously waiting to get my hands on it since you first came up with the storyline. And I love how in all of your books you tell the story from both the hero and the heroine’s point of views, giving readers an inside glimpse into both characters psyches. It’s one of my favorite things about your writing style!

It sounds like Detective Foster and Jay have a bumpy road ahead of them, not unlike your own daily routine. For those of you who don’t know, when she isn’t crafting tantalizing plot lines, Stacy Eaton is also a police officer. Stacy, I’ve noticed your books typically have an element of law enforcement in them, whether it’s primary or secondary to the storyline. Is this something you intended when you first began to write?

Not necessarily intended, but we as authors know it is much easier to write what we know. I’ve been in law enforcement for fourteen years. Been a detective for almost two and a certified CSI for about four years now, so I understand all the elements of it. There is no need to do any research, or if I do, I just go to one of my colleagues and get what I need.

With the way the public loves to watch shows like CSI and Criminal Minds, I know that writing these types of books will open them up to a huge number of readers.  Even if I am writing paranormal, I can make the story seem even more realistic because I apply the knowledge that I have.

Well you do a fantastic job of it! As an avid CSI crime show watcher, I often find myself enthralled with your characters when they’re knee deep in evidence. You write with such creative passion and enthusiasm you always make me feel like I’m right there beside them.

Six Days of Memories. You’ve already intrigued us with how you came up with the alluring title, but can you tell us how you created the story and characters?

Lol… That’s a hard question. The story just came to me. I came up with the concept in about thirty minutes one day while I was getting ready and heading into work. Usually, when I come up with a concept, the rest of the story just flows along, just like this one did. I didn’t really know where this one was going, until I had finished it.

As for the characters, I don’t create them. I give them names and they create themselves. It doesn’t matter how many times I try to put my characters into a style, they always break out and become their own people.

I love how you say you just gave them names and they created themselves. Such a very true statement any writer can relate to! What most people don’t realize is that characters do tend to have a mind of their own, we merely give them an outlet for them to tell their story.

Here’s a fun one for you. Every author has a favorite scene of the story that tugs at their heartstrings. Which one was yours?

Oh!!! There are two that really pull at my heartstrings, but Jay has a way of tugging at heartstrings on and off during the story. In one of the scenes, Jay has his memory back and he is talking to Tasha.
This is a quote that he says, “Don’t you close those beautiful eyes from me! Don’t shut me out, Tasha.”
That scene is very powerful and those words have whispered through my mind so many times along with a few others. I love the power and chemistry that they two have, and Jay is such an amazing character that you will find yourself pulling for him early on.

*sigh* Jay sounds like a handsome, hunky hero who will make it hard for me to put the book down. Gotta love those kinds of guys! As much fun as we’re having, Stacy, I think it’s time to wrap up this shin-dig. Do you have any parting words of advice for our audience? Minus the handcuffs and taser gun, that is ;-)

Lol… The handcuffs and Taser will be reserved for later use.  I’ve enjoyed chatting with you Amy – and look forward to hearing from your readers.  I’m excited to release Six Days of Memories and also Distorted Loyalty that came out on June 13th! I hope readers are interested enough to check them out!  Thanks again Amy! 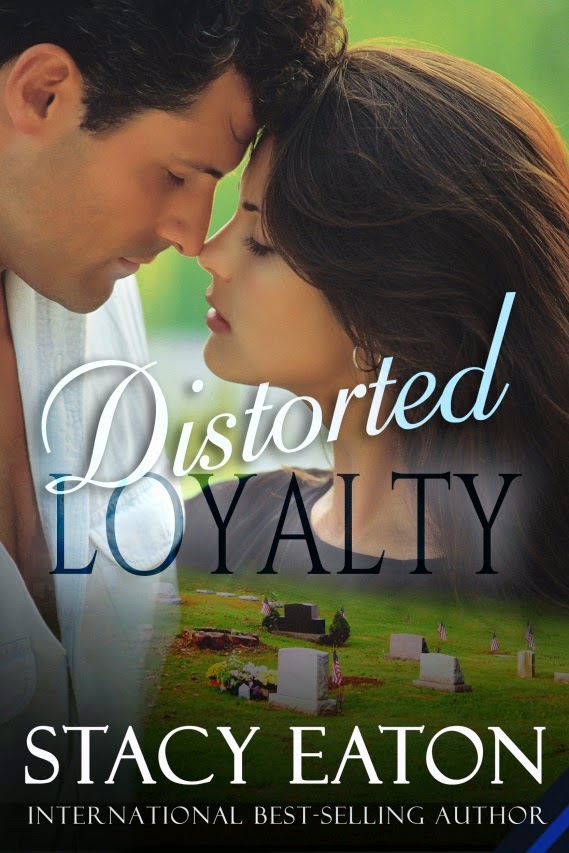 Sales Links:
Amazon
Barnes and Noble
Kobo
.
Blurb:
Emergency room Doctor Rachel Wilde and Detective Grant Murphy meet by chance and it takes only one glance and a simple gentle touch to ignite their senses.

When Grant’s wife is in a tragic accident, Rachel goes above and beyond the call of duty to save her life. It is the moment she faces Grant again that their lives begin to spin out of control and they realize the lives of their loved ones were deeply intertwined.

The distorted loyalties of the ones they lost will drive a wedge between them and it will take another death, a last will and a look beyond the grave to find the path they must follow.

Early Review on Amazon:
5 Star - Rachel and Grant are both married to the wrong people. But despite their mutual attraction, they stand on principles and upload their values, even in the face of dastardly betrayal. Events conspire to force them to repeatedly cross paths, starting with the fact their children are dating. However both of them stand firm and do not take the easy way out.

What I liked about Distorted Loyalty is the fierce conviction on Rachel’s part to be honest with those around her. Grant, while having equally strong convictions, is afraid to face his own feelings of inadequacy and rejection. Many times, Rachel could have taken a less noble road, but she knew that any relationship based on dishonesty would end up in disaster.

The other refreshing thing about this story is the emotional maturity of the hero and heroine. Even though they have a slew of problems that keep them apart, none of it is based on immaturity, silly misunderstandings and overreactions—the stuff you see in other romance novels. Instead, these are real people dealing with overwhelming problems. They are tempted, but do not fall into bed or do things that they would be ashamed of or regret. This book shows that not every romance book has to have sex and flowers, but that a love based on emotional strength is more likely to last and be satisfying for a lifetime.