Star crossed lovers they may not be, but then again, Quin and Layla's story is far from Romeo and Juliet. Author B.C. Burgess does not fail to disappoint in the release of not only book 5 in the Mystic Series, but book 6 right alongside it! 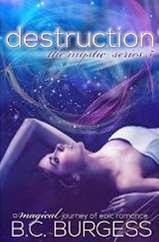 Destruction begins with the aftermath of the battle on the ice where Layla killed Agro. Still reeling from both the deadly battle and nearly losing her bond mate, Quin, Layla is faced once again with another battle when she learns the fate of mankind rests solely on her shoulders.

In Destruction, Quin and Layla uncover shocking secrets that threaten to tear apart the normal life they've battled so hard to protect. Can they face this new threat together without letting it drive a wedge between the bond that has brought them together? 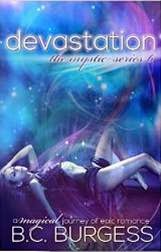 Devastation begins with Layla in the clutches of a deadly enemy, and Quin suffering a slow death without his love by his side. The agony both characters face in this book is unparalleled in any of the books of the series, and is by far the most heart wrenching.

Both Quin and Layla are willing to sacrifice everything to regain the most precious things they've lost, but in the end, will it be enough?


Haven't read the first four books of the series? No problem! Click the pictures below and get started, they won't disappoint!

Author B.C. Burgess is a small town girl born and raised in Oklahoma, but she dreams big and tend to let her imagination run wild.

She's addicted to coffee and writing, so the combination is her idea of heaven. She reads every day, if only to her young son, whom she hope to someday inspire with her passion for writing.

Oh yeah, She's also addicted to the characters in the Mystic series. Check out why!

Visit B.C. Burgess on the Web: