Help me in giving a warm welcome to author Judith Anne Barton, author of The Angel Connection! Enter your name and email address in the comments below and enter for your chance to win your own copy from the author! 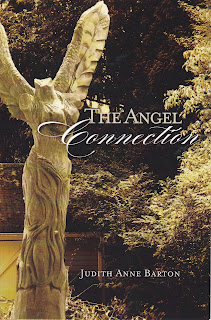 The Angel Connection tells the mystical tale of two women born a century apart, but whose destinies are mysteriously linked by long held secrets. In the vein of The French Lieutenant’s Woman and Outlander, this compelling novel straddles historical and contemporary fiction. The Angel Connection is a timeless love story told by two female protagonists who transcend the boundaries of time and space and are hurtled toward their inevitable collision.

In 1996, newly divorced TV journalist Morgan Reed finds herself at a personal and professional low, and escapes to pastoral Bucks County. There she discovers her new home is birthplace to the Pennsylvania Impressionist movement. Morgan impulsively buys an old haunted church rectory and is drawn into creating a documentary about the local painters of that era. She also gets pulled into an unsettling love affair with her fellow filmmaker, which raises the ire of her adult son. In 1895, in the same Bucks County Church Rectory, Evangeline Laury, the beautiful and restless wife of a zealot preacher is torn between her role as obedient wife and her birth as a talented painter in the hands of a charismatic local Impressionist who soon becomes her lover and soul mate. Evangeline struggles with her duties, but the desire for her lover and her art come at a cost, and an unspeakable tragedy makes her a virtual prisoner of the rectory. Bound together as they try to martial universal forces beyond their control, Morgan in 1996 and Evangeline in 1895 both struggle to fulfill their needs for creative expression, true love and familial duty. As Morgan uncovers the drama that unfolded in the old house 100 years earlier, the two women’s pasts meld into the present, igniting karmic embers and bringing a shuddering retribution. Where does one story end and the other begin?

On Writing The Angel Connection

“Disillusioned by my own recent divorce, yet still a romantic at heart, I was inspired to write the perfect love story-one that I would fall into as a reader. Like my modern day protagonist Morgan, I had just relocated -- escaped is more like it! -- to a quaint historic village in Bucks County Pennsylvania. The achingly beautiful countryside, coupled with the spirits of artists who had flocked there for centuries seeking a muse, set the stage for a compelling, timeless, mystical love story. My immersion in yoga and eastern spiritualism sparked the idea for parallel universes: two creative women, born a century apart, living in the same house, unable to reconcile their artistic passion with the obligations of family and the longing for true love. The intriguing prospect of re-incarnation was in place.” – Judith Anne Barton

1. When did you first know you wanted to be a writer, and what did you write about?

I wrote my first poem when I was nine. I can still remembering waking up that morning and feeling very happy. So happy that I wanted to write about it. So the poem was called “It’s a Beautiful Day” and it was really a love poem to my family.  Poetry was a key element of self-expression during my late teens and early 20s, especially love poems of deep longing. In later years some of that poetry was published. While attending high school I was in the Honors writing program, where I continued to write poetry, short stories, essays and humorous monologues, which I performed in school assembly. I also wrote the lyrics to my class graduation song. My mother encouraged my writing as well as my acting. In college, I took the career placements test and the results came back: “Your Career in the Theatre” and “Your Career as a Journalist.” I’ve always combined writing with performing. I was a major market television journalist, reporter and entertainment critic for 15 years. Later I turned to playwriting and screenwriting. I completed my first novel in 1993. It was about a rumor that almost brought a television station down. It was well-written but I felt the material was too controversial so I put it in a drawer where it remains. Finally in 1995 the inspiration for The Angel Connection consumed me and I was driven to write the quintessential love story-the book that I would love to read. It took 17 years to complete, but I never gave up. And now I’m thrilled to see it finally manifested! My next book project is two thirds done and it’s a modern murder mystery whodunit called How the Property Lies. It’s set in Bucks County, Pennsylvania, as is The Angel Connection and has lots of romance, intrigue and show biz references. The plot is tricky but I like that challenge. I’m also working on a rom com screenplay with a writing partner. I have a list of books -- including a memoir or autobiography -- that I’m eager to begin.

2. What inspires you to keep on writing when you lose your focus?

That’s a great question. I credit writing groups with keeping me going on many projects through the years. I advise writers to find a small group of other writers with whom you feel comfortable and whom you respect and trust. It’s important that these colleagues know how to critique each other’s work with sensitivity and encouragement, at the same time making constructive suggestions that you can take or leave. Many writers can feel overwhelmed or destroyed by careless or harsh critiques. The ideal writing group should make you want to try harder, be better and return again and again. I love meeting every week because it provides incentive to keep writing so I’ll always have something to bring to the group. Also, when I lose focus or feel stuck, I tell myself that the solution exists, it just hasn’t manifested. Just as the completed project awaits final manifestation. It exists in time and space; you just can’t see it yet. Meditating, or allowing myself to relax and let the problem settle and “brew” for a few days always results in some kind of epiphany.

3. If you could choose to write from anywhere in the world, where would that be?

My first choice will always be historic Bucks County, Pennsylvania, the setting of The Angel Connection. The piercingly beautiful landscape that runs for miles along the Delaware River has been muse to artists, mystics and writers for centuries, and was the birthplace of the Pennsylvania Impressionist movement. I found my muse there too. It’s paradise to walk along the river, or on a well-worn trail through the woods, or along a winding country road because the grace and splendor of nature are everywhere. With every footfall, ideas pounce, thoughts congeal, characters announce themselves, and plots thicken! I must have walked hundreds of country miles as The Angel Connection came to life in my mind and heart.

Bellagio on Lake Como Italy is also a mystically beautiful setting. I ‘d like to sit at my desk with the shutters open wide to reveal the shimmering blue of the placid lake against a background of forest green mountains dotted by tiny villages. I think I could write another wondrously romantic story there.

My third choice would be the tiny village of Isle-sur-Sorgue in the Provence region of France. With its cobblestone streets, ancient buildings, antique shops and tiny river with groaning waterwheel, this is an enchanting town steeped in history. It’s also a very romantic place, and it should be obvious by now that I find inspiration in historical romantic locations!

4. Are you a daydreamer or a realist and why?

Oh I am definitely a daydreamer! I grew up with a tremendously talented, beautiful, intelligent mother, whose isolation in a dreary suburb away from her beloved New York drove her into depression because she couldn’t be the artist she was meant to be. I think maybe parts of my heroine Evangeline in The Angel Connection, came from my own mother’s creative repression. I was so often sad and longing for her because she spent a lot of time in bed, believing I guess, that there was nothing worth getting up for. Yet she poured all of her passion, longing and creative sensibilities into me. She had me walking with books on my head when I was four, learning Shakespeare around the same time. She read me poems and stories in her theatrical fashion, taught me a love for reading and books, coached me through every play, monologue and performance I did in school.  In fact when I was nine, she coached me to first place in the county declamation contest. I was the youngest student to ever win. When I was very young and Mom was still doing community theatre, I would watch the living room rehearsals from my perch on the stairs, often cuing the actors when they went up on their lines. I was only three. I guess being surrounded by poetry, Shakespeare, creativity and drama, coupled with a longing for my mother to be happy, set me up to be a highly imaginative, daydreaming, hopeless romantic, with tendrils of impending doom always hovering around the edges of the wished-for happy ending.

Judith Anne Barton is an author, actress, playwright and award-winning television journalist. The Angel Connection is her first novel. After a successful career in broadcast journalism in Philadelphia that spanned over a decade, Barton moved to Bucks County, PA where she worked with her mentor, the late JP Miller, author of the classic The Days of Wine and Roses. Her first play Opening Night received its world premiere at Philadelphia’s Lantern Theatre Company, and was named a finalist in the Sundance Film Lab competition. She is the co-author of The Best Letter Book Ever and is also a published poet. Barton now resides in Los Angeles where she also pursues an acting career in film and television. Her sons, William Wheeler (The Reluctant Fundamentalist) and Thomas Wheeler (Puss in Boots, Puss in Boots II) are successful screenwriters. http://judithannebarton.blogspot.com/