Today we welcome Tricia Drammeh as she talks about her career and her book,
The Fifth Circle! 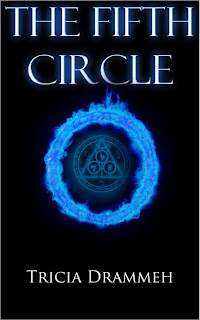 AM: When did you get serious about writing?

TD: I’d always had a vague idea of wanting to write a book and had even tried to write one several years ago. About three years ago at the age of thirty-nine, I finally finished a novel, The Claiming Words. It was a mess, but it was finished. From the day I finished writing that first draft, I knew writing was my thing. It’s what I wanted to do, even if I didn’t make any money doing it.


What is your viewpoint of the current trends going on in the publishing world?

I think self-publishing is the next big thing. With traditional publishers accepting fewer and fewer new authors every year and cutting back on marketing budgets for those new authors, self-publishing gives writers a chance to get their book published. It’s also a way for the author to retain total control over their manuscript. I think big publishers need to make some major changes if they want to continue to attract talented, innovative authors. And, I think the plague of independent publishers that seem to pop up overnight is a serious threat to newbie authors—they can’t do anything for the author they can’t do for themselves through self-publishing, and in many cases these new presses and their inexperience can do way more harm than good.

How has that affected how you went about publishing?

When I first began to send The Claiming Words out to agents, I received enough rejections to break my spirit. It was very humbling. In my mind, landing an agent and a big publishing deal was the only way to go. At the time, there was still such a stigma - I think that's still true to a certain extent. I ended up publishing The Claiming Words with a small press. I found myself in a strange limbo where I didn't have control over my book (to run freebies, fix errors, etc) AND I didn't have the advantages of using a traditional publisher such as a shelf space in bookstores. It was the worst of both worlds. So, when I was ready to publish The Fifth Circle, I didn't even consider querying agents or submitting to a small press. I did what I should have done with my first book - I self published.

Do you have any favorite genres?

I tend to gravitate toward young adult paranormal books with sparkly covers. I love fantasy in any form or sub genre. I also read mysteries, literary fiction, the classics, romance, and thrillers.


Sean is no stranger to darkness. He's overcome a dangerous addiction, struggled with mental illness, and faced relentless bullying by his peers. His best friend, Alex, has always been there for him, but when he falls in love with her, he replaces his online gaming obsession with a possessive interest in her. Alex's survival depends upon her ability to lock memories of her troubled childhood deep inside her mind, but an unhealthy relationship with Sean causes dark visions of her past to rise to the surface. Sean's obsession and Alex's complacency collide, resulting in tragedy. Together, Sean and Alex live in a hell of their own making. One will escape at the expense of the other. Both will discover why Dante chose to condemn the Wrathful and the Sullen in the Fifth Circle of Hell.