My hilariously fascinating interview with
writing duo Herro and Laz, authors of
Kinetic! 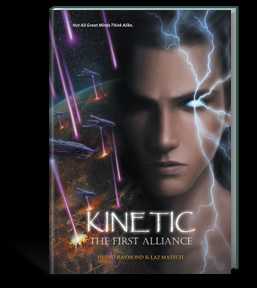 AM: What inspired you to become a writer?

Herro: It really happened by chance. The story of “Kinetic” was truly meant to be an animated television show, but I quickly learned I did not have the funds for that. With some support from my now co-author Laz, we decided the best chance for seeing this story come to life would be to write a book about it. That awoke within me a talent I never knew existed.


Laz: Can't say really, Greg had a story and I wanted to help tell it. I have always had a knack for writing but never really had a chance to utilize it. I love telling stories and with writing I am able to do so.


If there were anything else you could do doing (other than writing), what would that be?


Herro: Probably fighting crime, I have a bit of a superhero complex. I saw the movie “Kickass,” and it only confirmed my theories that I could be a real life superhero.


Laz: There isn't much I would be doing other than writing. Everything I've wanted to do from making comic books to creating video games, it's all a form of creative writing and imagination, but if I had to say I would love to be able to play sports for a living.

What is/are your favorite genre(s)?


Herro: I like really gritty stories, where things don’t always pan out or go right for the protagonist. The kind of tale that gives you a twist ending or goes in the polar opposite way you thought it should, or normally would go. Stories that aren’t afraid to sacrifice main characters always resonate with me.


Laz: Science fiction, fantasy. I need excitement to keep me entertained. I also enjoy very much a good murder mystery or a detective novel.

Do you have any upcoming events or book promotions?

We have a book signing coming up in the beginning of February at the Barnes and Noble store in New Brunswick, NJ if anyone is around that area. We also will be attending as many comic book conventions as possible including Youmacon in Detroit where we should have a table and panel, so come check us out and get your book signed.


Where can people find you and your work on the web?


We have really flooded the internet; I think we’re on at least thirty different social media sites. To stay up-to-date check out http://www.facebook.com/KineticAlliance and https://twitter.com/AllianceKinetic but we’re also on kineticalliance.com, instagram, tumblr, deviantart, fictionpress, youtube, shelfari, goodreads, kickstarter, Wikipedia, linkedin, reddit, stumbleupon, freado, smashwords, wattpad, maniacreaders, and so much more.
Kinetic Synopsis:
"Kinetic" focuses around five youths that are born with amazing kinetic abilities due to an intergalactic war that is being waged light years away. The story mainly follows Alexander Carter, an adolescent from Houston, Texas. Alex is just an average teenager trying to make it through high school when life takes a turn for the fantastic and the bizarre. One night, he finds an alien named Shyra in his bedroom. She tells him that Earth is threatened by the Zenakuu, a planet originally known for traveling to other planets to mine resources.
Unfortunately the Zenakuu traveled to an uncharted planet and began to drill. They unknowingly unearth a visceral species of insect-like parasites that can consume whole civilizations in mere days.
In order to save the galaxy from this threat the captain of the ship initiated the self destruct which would systematically blow up the entire planet. He succeeds in doing so, but chunks of the planet are sent hurling back towards their home world. Once there, the monstrous insects go to work eating everyone and everything in sight.
The planet sends out a distress call to their sister planet Kalryn, but after weighing out the danger, they decide not to help. Years after Zenakuu was presumed dead from receiving no aid, they attack and invade their sister planet Kalryn.
By the skin of their teeth the Kalrynians are able to fend them off, but the Zenakuu swear they will have their revenge, each time invading other planets, and bringing their newly enslaved races to join the fray. Finally, Kalryn had enough, and the council decides to recruit other worlds to help fight as well. They send a guide to Earth to unlock and train teenagers to use kinetic energy such as Pyro, Electro, Aero, Hydro, and Geo kinesis.
Now Zenakuu has their sights set on Earth, Shyra tells Alex that she has come to train gifted individuals, known as Kinetics also known as ESPers (people with extrasensory perception), to guard the Earth from the Zenakuu threat. He and a handful of teens are the planet's last hope of survival. She takes Alex to her ship, where he trains to be one of the few elite superheroes with the power to fight the aliens who have come to Earth fully intending to win a brutal intergalactic war.
The story is about the ongoing war between the two planets and the teenagers who have been torn away from their families to help fight a battle they originally had nothing to do with. The fate of humanity, and the galaxy, is now in Alex's hands, and he has no idea what he's gotten himself into.