A warm welcome to author Julie Rowe, who has stopped by to share with us her newly released book, Playing Doctor! 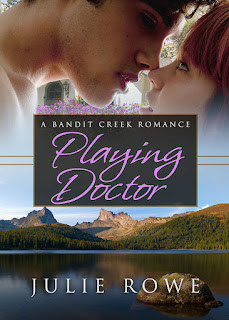 Playing Doctor emerged from research I’d been doing on the repercussions of military service doctors might have after returning from military duty in . More and more of them are seeing actual fighting or are very close to actual fighting. The MASH units of earlier wars and military actions have evolved into a few different military medical units. One of them is the Forward Surgical Team. This is a team made up of about 20 people, surgeons, doctors, nurses and other highly trained medical personnel. They operate very close to combat fighting and treat wounded who would otherwise not survive an air MEDEVAC to a fully equipped hospital or surgical unit.

Imagine for a moment that you’re in the middle of surgery on a patient who has been critically injured. The fighting moves closer. Gunfire, smoke and screams are all around you. Despite all the chaos, you still have a job to do, lives to save and even though your first instinct is to run for cover, there’s nowhere for you to go…

Now, imagine it’s three months later, you’re home in . You’re safe, you know ninety-nine percent of the populace, but every night is a nightmare, where you’re back in reliving the danger and horror of war all over again.

How would you cope?

My heroine’s answer to that question is rather unconventional.

Dr. Abigail Westward has been home after two tours of duty in for about two months and she’s taken up an unusual hobby. A hobby that has the local sheriff scared stiff: tossing lit dynamite sticks into the still waters of in . After locking her up for twenty-four hours, then a couple weeks later for forty-eight, the sheriff is getting desperate to find a way to combat Doc Abby’s explosive habit. He calls in a very special Doc-sitter, Jacob “Smitty” Smith, a fellow soldier of Abby’s and the only man who might be able to find out what was really going on with Bandit Creek’s doctor.

Smitty is in Bandit Creek for one reason and one reason only. He loves Abby, has from damn near the moment he met her in . He’s stayed at arm’s length until now because getting involved with anyone while on a combat mission is just plain stupid. But combat is over for both of them and he’s waited long enough. He wants her and he’ll play dirty to get her because he knows she’s hurting deep down in a place she doesn’t want anyone to see.

Seeing Smitty waiting for her on shore, Abby gives up the dynamite with little or no argument. It’s far too much fun to verbally poke at him and the sheriff, until she finds out he’s been hired by the town of Bandit Creek to ride herd on her. She’s resistant to the idea right up to the moment someone attempts to shoot her in the middle of town. Now she and Smitty have to figure out who wants to kill her and why before he’ll go, because if he stays she’s not sure she’ll be able to resist temptation. Smitty is her only weakness. He’s the one man she trusts absolutely, the one man she loves, the one man who knows her terrible secret.

An excerpt from PLAYING DOCTOR:

“Is this one of those I-love-the-smell-of-napalm-in-the-morning moments?”


Doctor Abby Westward paused with a stick of dynamite in one hand and a lighter in the other. She glanced over her shoulder at the man standing twenty feet away, give or take a few, on the dock. He stood with both feet spread and braced and his arms crossed over his chest. His blond hair was longer than she remembered, feathering over his forehead, making him look like the dangerous version of a laid back surfer.


He’d had to have caught on a ride of a hell of a rogue wave to end up on the of Lake outside of .


Surprise could only hold her immobile for so long.


She turned away, lit the dynamite then threw the stick into the air as hard as she could toward the center of the lake. Two seconds later, an explosion sent water in all directions.


“I prefer the smell of burnt sawdust,” she said, turning around to talk to her audience. She hadn’t expected to see him again. Not after the hell they went through in . Those memories were something she didn’t want to face in the bright morning light. “What brings you out this way, Smitty?”


“Well, the Sheriff gave me a ten minute head-start. He said if I could get you off the lake and any dynamite you might have in your possession out of sight he won’t arrest you.” Smitty shrugged his large shoulders. “Otherwise, he said he was going to throw you into lock-up for a week.” Smitty paused. “This time.”


Abby grunted, but didn’t say anything. What to do, what to do? She looked out over the lake, but it was as still as open water could be.


“Last time was only 48 hours,” she said with a cheeky grin. She’d learned long ago that often the only way to get out of trouble was to own up and put a bow on it.


It didn’t look like Smitty was buying it. “The time before that was barely 24.”


“You got a hearing problem?” she asked. The oars were warm and worn under her hands, the short trip to the dock enough to loosen up the muscles in her back. Smitty moved over to the section of dock where she parked and she tossed him the rope. He tied it off and held out his hand to help her out of the boat.


She took it without hesitation.


He probably didn’t understand how significant that was. She hadn’t touched anyone voluntarily, outside of her office hours, since the day she got home.


She stared at their joined hands, not feeling panic or fear or rage, and relaxed a little more.


She glanced up. Smitty was staring at her as if he’d never seen her before, or maybe it was horror making his eyes so careful.


She smiled at him. At least she assumed it was a smile on her face. He already knew the answer to his question. “I’m so far from okay I’d need a map to get there.”


His face never changed. Not even a little.


Smitty always had a good grasp on reality. Given the crap they’d been through, maybe too good. A chuckle trickled out from between her lips.


How wonderfully absurd. She burst out laughing, bending over at the knees, tears raining down her face. Smitty kept hold of her hand the entire time.


“Where’s that dynamite?” He looked over her shoulder into the boat.


She held out the bag in her left hand.


“If I told you I’d have to…” Her voice died before she could say the words. Killing was not an act she could joke about. “…do something bad to you.”